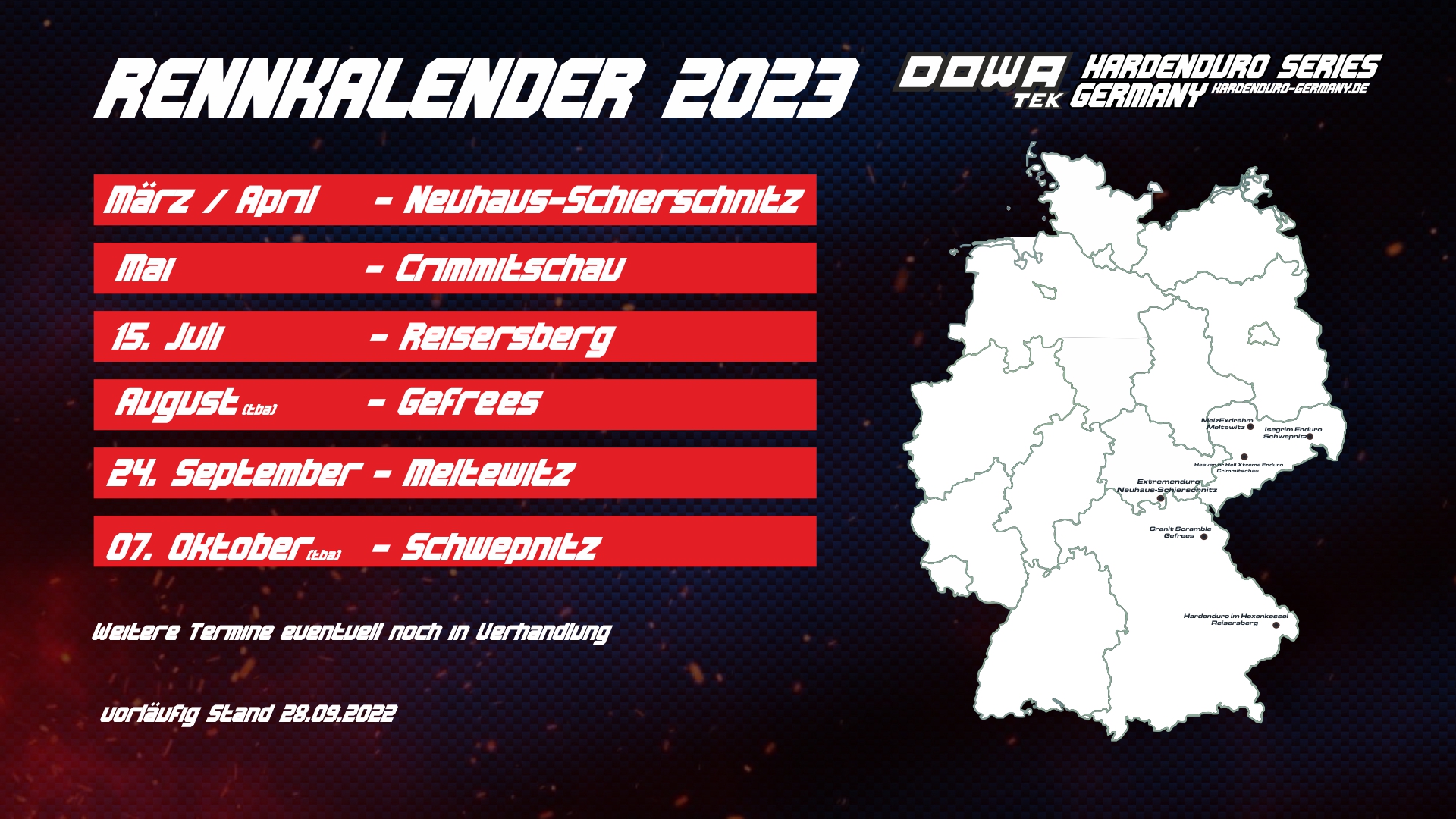 Just in time for the final weekend of the 2022 season, the series organisation of the DOWATEK HardEnduroSeries Germany is looking ahead to 2023.
The series presents a first draft calendar for the sixth season of its existence since the debut year 2018.

Many old familiar races are on the calendar, as well as two returnees to the calendar, where true HESG battles have already been fought in recent years. For example, there will be a classic right at the start of the season with the races in Neuhaus-Schierschnitz. In the season ending this weekend, the race in southern Thuringia was missing, but there were many questions as to why the race was not on the calendar. The return will now follow in 2023, where the team around Thomas Sünkel will surely find another highlight in the MC Isolator terrain. The target date is the end of March / beginning of April, but this still has to be coordinated with other events.

The second race will be held in Crimmitschau, an event that has become legendary in western Saxony. In 2022, a new series record was set there with 225 participants. Drivers and fans can already look forward to a date in mid-May. After that, there will be a summer break, followed by the race in the Bavarian Forest on 15 July. Reisersberg has meanwhile established itself in the calendar and will host an HESG race for the third time.
This will be followed by a hot autumn with the races in Gefrees, which has set new standards for a Hardenduro race in Germany.

Meltewitz is also back on the calendar, of course, where the action will be intense on 24 September. In addition, a mode with checkpoints and a fixed number of laps like in Gefrees will be run for the first time in northern Saxony.
As things stand at the moment, the final will take place in Schwepnitz on 7 October. After some reconstruction work, the track has been given a new look and will certainly be a new highlight as well.
The series management is currently still negotiating with two other organisers.

Denis Günther, HESG series management: "We are happy to be able to present a first draft calendar so early again. In the current situation, it's not so easy for everyone. However, we all think we have mastered the 2022 season very well and are already looking ahead to 2023. We would already like to thank the organisers who have remained loyal to the series. Our focus continues to be on eastern and southern Germany, where we have the best tracks and also meet with a lot of interest from the riders."

Registration for riders from the previous season starts at the beginning of December and for all new interested riders from 01.01.23 12.00.
Up-to-date information on the Dowatek HardEnduroSeries Germany can always be found at www.hardenduro-germany.de and on our social media channels.